Pi is good, Tau is better

In contrast to tau, pi describes the ratio of circumference to diameter of the circle (π = U/d). Problem with this: Circle formulas never use the diameter, but always the radius. This 'birth defect' led to the fact that in many formulas "2π" occurs, which corresponds exactly to tau. The exact value of tau is:

Using tau instead of pi simplifies many formulas and makes it easier to get started with circular geometry. Here are a few examples:

The calculation of the circumference (U), i.e. the length of a circle line is calculated from the circle radius (r) alone as follows:

With Tau, the subdivision of the circumference of a circle into semicircles, quarter circles, eighth circles, etc. is completely simple and natural: 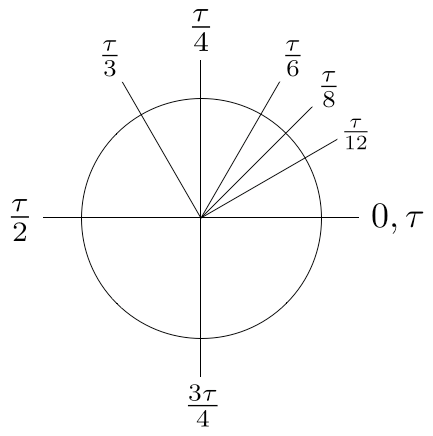 Actually quite simple: take the formula for circumference or area of a circle and multiply it by the ratio of the angle (α) to the full circle (360°). For the circumference, of course, add the two radii of the circle.

Volume of a sphere

The volume (V) of a sphere is determined by the radius (r) as follows:

Surface area of a sphere

The surface area (O) of a sphere is determined by the radius (r) as follows:

Volume of a cylinder

The volume (V) of a cylinder is determined from radius (r) and height (h):

Surface area of a cylinder

The surface area (O) of a cylinder is also determined from radius (r) and height (h):

Volume of an ellipsoid

The radian (unit symbol "rad") is an angular measure in which the angle is given by the length of the corresponding arc in the unit circle. Because of the consideration of the circular arc for the indication of the angle, the indication "in radian measure" is also called arc angle.

The range of values in the unit circle is between 0 rad and τ rad (corresponding to 360°, also called full angle or full circle). In many calculations in physics and mathematics, the radian is the most useful angular measure (for example, for angular velocity and sine and cosine).

Here is the conversion radian ↔ degree for the unit circle:

Sum of all interior angles

In a square (whether square, rectangle, rhombus, trapezoid, or parallelogram), the sum of all interior angles is always 360° or τ rad:

In a triangle (no matter what shape), the sum of all interior angles is always 180° or ½τ rad: